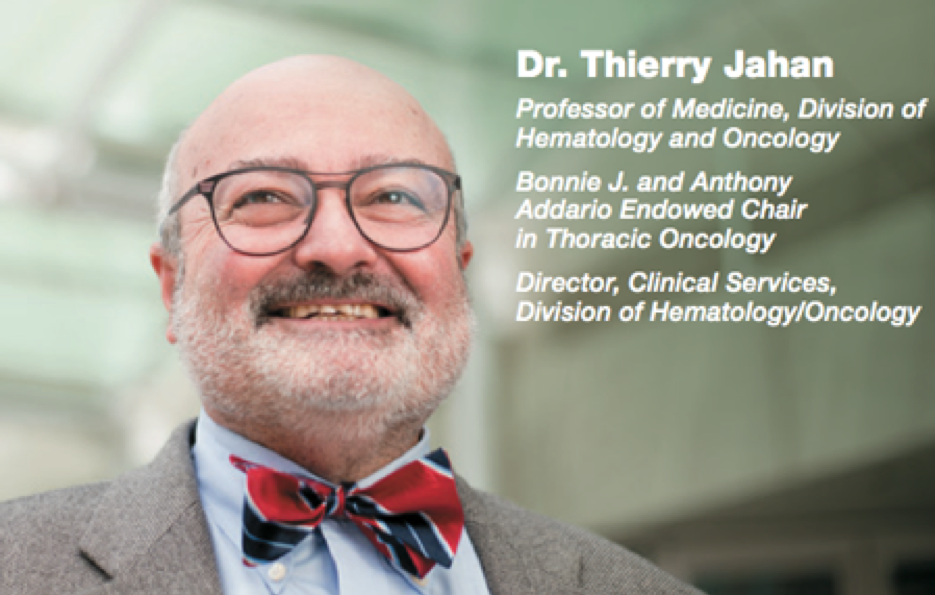 As a child, oncologist Thierry Jahan, MD, remembers that his mother was always tired. After doctors diagnosed her with pancreatitis and performed surgery, she was able to climb to the top of the Statue of Liberty with her children. "As an eight- year-old, I said, ‘I want to do what those doctors do – I want to give another kid his mom back.’"

Jahan grew up in France, Venezuela, and New York, and started medical school in Paris. The competition was cutthroat – less than 10 percent of first- year students advanced to the second year, and troublemakers threw dead lab mice at one professor to disrupt her lecture. Jahan enthusiastically transferred to the American educational system, where he got hooked on hematology/ oncology in medical school. "It was an extraordinary emotional and intellectual challenge, and the field was starting to move in a good direction," he said.

Soon after joining the faculty in 1994, Jahan and thoracic surgeon David Jablons, MD, co-founded the UCSF Thoracic Oncology Program, building it into a leading program for lung cancer, mesothelioma and other thoracic malignancies.

"Dr. Jahan has a gift for balancing the realities of the delivery of treatment options with an impeccable, warm, engaging bedside manner," said Eric J. Small, MD, FASCO, chief of the Division of Hematology and Oncology, Stanford W. and Norman R. Ascherman Endowed Chair, and Doris and Donald Fisher Distinguished Professor in Clinical Cancer Research.

"We offer solutions and possibilities," said Jahan. "I tell patients, ‘This is what the average patient can expect, but I’m shooting for the good side of the bell curve.’ I empower them to make decisions about how they want to face their disease."

When his own father was diagnosed with mesothelioma, Jahan suggested a recently approved drug that did not increase survival but helped reduce symptoms. His father savored one last holiday season with his children and grandchildren, then died two weeks later. "That experience was painful but extraordinarily informative," said Jahan. "I have a pretty good idea of what patients and families go through, and it helped shape how I do things."

In addition to leading many clinical trials, Jahan helped draft the National Comprehensive Cancer Network guidelines for lung cancer treatment, used by Medicare and most insurance companies to make coverage decisions. He also served on the UCSF Committee on Human Research and the Data Safety Monitoring Committee, helping ensure that clinical trials are conducted safely and ethically.

Jahan is the rare physician who enjoys conducting research audits, poring through patient charts in windowless rooms. "Rather than telling people, ‘You’re doing a bad job,’ I see it as a teachable moment – ‘Here’s what you’re doing well, and here’s how you can do better,’" he said.