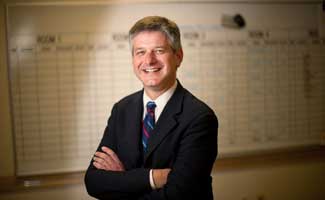 "My basic approach to medicine is to have humility," says gastroenterologist Jonathan Terdiman, MD. "The best teachers are the patients. If you listen to their stories, common themes start to emerge and lessons can be learned that are not necessarily reported in the scientific literature. At first the lessons are fragmented, so if you're not really in the game regularly seeing patients, you're going to miss them."

Terdiman founded the UCSF Colitis and Crohn's Disease Center, which treats patients with Inflammatory Bowel Disease (IBD) - a group of often painful and debilitating conditions that occur when the immune system damages the intestine through chronic inflammation. "His expertise in inflammatory bowel disease has no equal in the state of California, and he is widely recognized as one of the country's leaders in his field," says UCSF gastroenterologist John P. Cello, MD.

"Over and over, patients would say, 'I'm on this diet, and this seems to really help me,'" says Terdiman. "You hear it too often for there not to be some kernel of truth in it. A lot of times, the medical community says, 'It's a coincidence.' Now we're beginning to understand that diet plays a critical role in intestinal inflammation, and serious science is catching up to these patient observations."

Inspired by these clues, Terdiman and his colleagues are now studying the relationships among diet, inflammation and the microbiome - the complex ecosystem of bacteria living in the intestine and other parts of the body. They are also starting clinical trials of microbial reconstitution therapy, in which bacteria from a healthy donor's stool is transplanted into the colon of a patient with disease. "What actually gets transferred is an almost colorless, odorless effluent," says Terdiman. "It's the essence of stool, which is the bacteria. Those bacteria take up residence and grow, and it changes your intestinal microbiome pretty drastically and quickly, leading to a reduction in inflammation."

Terdiman also founded and directs the Hereditary Gastrointestinal Cancer Prevention Program, which uses genetic tests to assess risk and prevent patients from developing genetically related forms of gastrointestinal cancer, especially colon cancer. "The key to saving lives in hereditary cancer is that when you identify someone with it, you have to get the message out to the rest of the family," says Terdiman. Recently, the program launched KinTalk, a secure, web-based tool which allows families to share important health information - including family trees and results of family members' genetic testing.

"The thing that I get the most pleasure from is direct patient care," says Terdiman. "It's a great honor, that someone is asking you to help them."

Terdiman is married to Madhulika Varma, chief of the Section of Colorectal Surgery at UCSF. Together they have two young daughters, Mira and Joya.