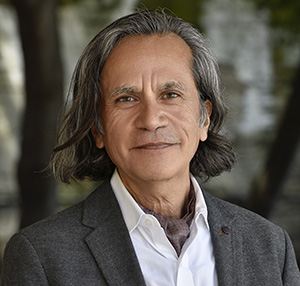 I am thrilled to announce that Jesus Ramirez-Valles, PhD, MPH, an accomplished researcher, academic, scholar, filmmaker and public health leader, has accepted my offer to become the chief of the UCSF Division of Prevention Science. As division chief, he will also hold the Walter Gray Endowed Chair in HIV/AIDS Science of the AIDS Research Institute. Jesus will start at UCSF on August 12.

Jesus was born in Juarez, Mexico, where he was raised by a single mother as one of six children. He received his bachelor’s degree from Mexico’s Instituto Tecnológico y de Estudios Superiores de Monterrey. He came to the U.S. in 1989 to continue his studies, ultimately earning master’s and doctoral degrees in Health Behavior and Education from the University of Michigan.

Jesus’s work is deeply rooted in the social and behavioral sciences and strongly focused on health equity and community engagement. His research and advocacy have centered on the challenges of health and health care for at-risk communities, including children, LGBTQI populations, people of color, and women. He has published more than 50 articles and book chapters, as well as two books: Compañeros: Latino Activists in the Face of AIDS (University of Illinois Press, 2011), and Queer Aging: The Gayby Boomers and a New Frontier for Gerontology (Oxford University Press, 2018). His work has been well funded by both the National Institutes of Health and several foundations. He is currently editor-in-chief of Health Education and Behavior, a major public health journal. His 2007 documentary, Tal Como Somos/Just As We Are, chronicles the lives of Latino gay men, transgender persons and people living with HIV/AIDS. It has been featured on PBS and as part of several international film festivals.

Jesus currently serves as director of the Health Equity Institute at San Francisco State University, a position he has held since 2018. Prior to that, he chaired the department of Community Health Sciences at the University of Illinois-Chicago School of Public Health. His connection to UCSF dates to 1998-2001, when he was a visiting professor at UCSF's Center for AIDS Prevention Studies (CAPS), a major center in the division he will now be leading.

I am indebted to Mallory Johnson, who has served as interim chief of the division for the last year. Mallory has been a superb and selfless leader, both this year and throughout his career at UCSF. I also thank Marguerita Lightfoot, the division’s past chief, who left UCSF last year to become associate dean for research at the Oregon Health Sciences University/Portland State University School of Public Health.

I am also grateful to the search committee, chaired by Monica Gandhi, associate chief of the Division of HIV, ID, and Global Health at ZSFG and director of the UCSF-Gladstone Center for AIDS Research. This was a vigorous and competitive search and I appreciate the hard work of the committee in helping us achieve this successful outcome.

“UCSF is the place where my research career began,” says Jesus. “It seems only fitting that I bring my decades of public health experience, as well as my life experience as a person of color and a gay man, to the important work of the division. I believe there is an elegant symmetry to my coming back to UCSF.”

I agree with Jesus, and am confident he will be a wonderful and inspiring leader for the Division of Prevention Science and our campus more generally.