John F. Murray, UCSF Emeritus Professor of Medicine, died in Paris on March 24 at the age of 92. The cause of death was, sadly and ironically, respiratory failure due to acute respiratory distress syndrome (ARDS, a condition he helped define) – in this case caused by COVID-19. 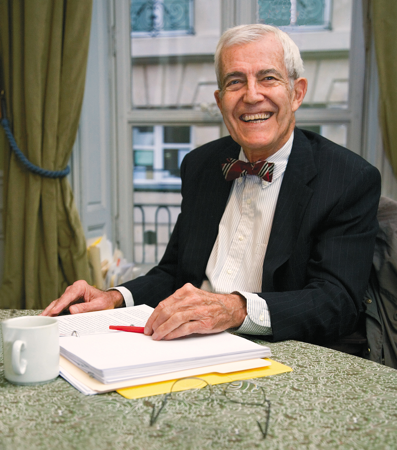 Dr. Murray had a huge impact on the field of pulmonary medicine locally, nationally, and internationally. He was dedicated to Zuckerberg San Francisco General Hospital (ZSFG), where he was Chief of Pulmonary for 23 years (1966-1989). He arrived as ZSFG (then called SFGH) when the hospital was being integrated into the UCSF training programs; he helped lead this integration. In addition, he served as Chief of the Medical Staff at ZSFG and developed the first professional fee billing system for the hospital.

Dr. Murray was highly regarded by trainees at all levels for his teaching of clinical respiratory physiology, generally focused on patients in the Medical Intensive Care Unit. Even after his retirement from the full-time faculty, he continued to attend in the MICU, teaching and inspiring future physicians with his intellectual rigor and his unwavering concern for the patient.

Dr. Murray was tall and distinguished – his bedside rounds were memorable for many reasons, not the least of which was his ever-present bowtie. In fact, when the nurses at ZSFG learned last week that Dr. Murray was gravely ill, many wore clip-on bowties in his honor.

Dr. Murray’s research contributions – focused mainly on the understanding and treatment of acute lung injury/ARDS, tuberculosis, and pulmonary complications of AIDS – were enormous. Through his research and leadership work, he left indelible marks on the clinical practice of pulmonary medicine, the process of selecting and training fellows in pulmonary disease, and on lung disease research. He played an instrumental role in building the American Thoracic Society (ATS) into the strong, internationally respected professional society it is today. His achievements in all of these areas owed to his clear thinking, clear writing and clear speaking, talents that he had in abundance.

The following is a brief synopsis of the professional achievements of which we think Dr. Murray would be most proud:

Assessing pulmonary manpower needs and building capacity: In the early 1970s, Dr. Murray led a national committee charged with assessing the pulmonary workforce. The group forecast a substantial deficit in pulmonary specialists, which prompted the scaling up of training programs and increased funding for both trainees and academic pulmonologists.

Selecting fellows in pulmonary medicine: To standardize the process of trainee selection, Dr. Murray catalyzed the creation of the Western Uniform Acceptance Date program, at first involving four training programs. The program ultimately grew into the Pulmonary Match, the first subspecialty matching program in the country.

Medical journal leadership: Dr. Murray assumed the editorship of the American Review of Respiratory Disease in 1974. During his editorship, Dr. Murray chaired a committee that developed a set of unified requirements for manuscripts, still in use today.

Leadership in the American Thoracic Society: Dr. Murray spearheaded the formation of scientific assemblies to broaden the scientific base of the society and provide an avenue for younger members to assume leadership positions. As ATS president in 1981 to 1982, Dr. Murray helped secure increased autonomy and fiscal flexibility from the Society's then-parent, the American Lung Association, a critical step in the ATS’s ultimate path to independence.

Pulmonary disease and AIDS: Soon after seeing the first cases of young men with pneumocystis pneumonia at San Francisco General Hospital in 1981, Dr. Murray realized that this new disease (later called AIDS) would be an immense problem, one that would frequently involve the lungs. Dr. Murray convened the first meeting on the pulmonary complications of AIDS. He later conducted a series of studies in Africa to delineate the spectrum of lung diseases in HIV infection.

Teaching through his writing: Although he ostensibly retired in 1994, Dr. Murray published 40 papers after retirement and continued to be actively involved in updating Murray & Nadel's Textbook of Respiratory Medicine, soon to be in its 7th edition. The book – the field’s bible – continues to reflect Dr. Murray's clarity of thought and writing, and his commitment to the application of sound scientific principles to pulmonary medicine. To many, his most memorable contribution was The Normal Lung (1976), a concise and beautifully written treatise on pulmonary physiology that has inspired generations of pulmonologists.

In sum, John Murray has influenced everyone at UCSF and ZSFG, and in his specialty. In pulmonary medicine, he played a key role in creating the field, establishing its national society and guiding its journal, editing the leading textbook, designing its training programs, and promoting research. At ZSFG/UCSF, he established the medical intensive care unit and created a division that became, and continues to be, a national leader in clinical care, research, and teaching. The yearly award at ZSFG that recognizes a faculty member who “demonstrates excellence in academic medicine and dedication to the humanitarian mission” is, fittingly, named for Dr. Murray, as is a distinguished professorship (gifts can be made here) that supports the Pulmonary and Critical Care division at ZSFG.

It is difficult to overstate John Murray’s influence and how much he has taught us all. He was truly a giant at UCSF, at ZSFG, and in the field of pulmonary medicine, and he will be missed.

Phil Hopewell, MD
Professor Emeritus and Past Chief of the Pulmonary Division, ZSFG