Announcing the appointment of Dr. Suneil Koliwad as Chief of the Division of Endocrinology and Metabolism at UCSF Health

I am thrilled to announce that Suneil Koliwad, MD, PhD, Associate Professor of Medicine, has accepted our offer to become chief of the Division of Endocrinology and Metabolism at UCSF Health, taking over from David Gardner, who is retiring next month. Suneil currently has a clinical practice based at ZSFG, while he runs an active research laboratory based in the Diabetes Center at Parnassus. As division chief, he will also become the Mt. Zion Health Fund Distinguished Professor in Endocrinology. 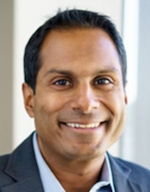 Suneil grew up in Southern California and received his BS from UCLA. He then moved to Houston, Texas, where he completed his MD and PhD (in molecular physiology) at the Baylor College of Medicine. He was a med-peds resident and chief resident at Baylor, coming to UCSF in 2003 as a fellow in diabetes, endocrinology and metabolism; he was also a postdoctoral fellow in the Gladstone Institutes.

Suneil’s research focuses on the mechanisms by which dietary excess influences the inflammatory activity of the innate immune system. His work delves into the causes of obesity, insulin resistance, diabetes, and fatty infiltration of multiple organs. He is currently Principal Investigator on two RO1 grants from the National Institutes of Health, as well as co-investigator on several other projects, funded by both the NIH and private industry. He has over 40 publications, including major works in the Journal of Clinical Investigation, Cell Metabolism, Cell Reports, and the Journal of Clinical Endocrinology and Metabolism.

On the strength of his research contributions, he was elected in 2018 to membership in the American Society of Clinical Investigation (ASCI), which recognizes the nation’s top research faculty.

Clinically, Suneil has served as an attending in the general endocrinology, diabetes, and lipid clinics, and on the inpatient consult service at ZSFG. He directed the ZSFG endocrinology clinic from 2008 to 2011. Other leadership roles have included organizing the annual UCSF Diabetes and Obesity Retreat for the past six years, serving as Associate Director of the UCSF Nutrition and Obesity Research Center, and organizing the first Diabetes Technology Innovation Summit for the American Diabetes Association (ADA). Suneil has served his field in a number of other ways, including as leader of the Behavior, Nutrition, and Lifestyle Management Writing Group for the ADA and co-author of the ADA’s annual “Standards of Medical Care in Diabetes” publication. He has given over 50 invited presentations, both domestically and internationally.

Those who have worked with Suneil have been impressed by his passion and his breadth. As chief of our Division of Endocrinology and Metabolism, he will seek to build on strong collaborations with UCSF Health, and with the Diabetes Center, the CVRI, ImmunoX, the Bakar Computational Health Sciences Institute, and other organizations on campus. While primarily a laboratory scientist, he is also excited about nurturing multidisciplinary programs in endocrine neoplasia and digital health, as well as  taking advantage of a variety of clinical, genetic, and biospecimen-based data repositories to advance precision medicine for endocrine and metabolic disorders. He is also highly committed to reducing health disparities seen in both obesity and diabetes.

Suneil and his wife Leena live in Burlingame and have two children, Priya (20) and Rajiv (15). His pastimes include travel, movies, and sports – particularly playing and watching baseball.

I’d like to thank Dr. David Gardner for his 41 years of remarkable service to UCSF and our department, the last 14 of which have been as division chief. David has provided strong and steady leadership across all of the missions of the division. Under his guidance the division has been consistently ranked among the top Diabetes and Endocrinology programs in the nation by US News & World Report; it was #3 on the list this year. I also wish to thank the search committee, led by Dr. Dolores Shoback, for its superb service and strong support throughout this process.

Please welcome Dr. Suneil Koliwad to his new role as chief of the Division of Endocrinology and Metabolism at UCSF Health.